Endless Spear Humans; the great survivors of the Venswood, the resourceful Spears live off the land and hunt down the threats to their tribe.

The Endless Spears value family and the natural cycle above all. Their survival depends on each other and a well curated ecosystem. This reliance on the wilderness and trade results in diverse tribes with a variety of traditions all stemming from survival, their prey, and their ties to the Otherside. It isn’t often to find two Spears dressed the same, but you can bet that they are both wearing trinkets of some sort from their ancestors. 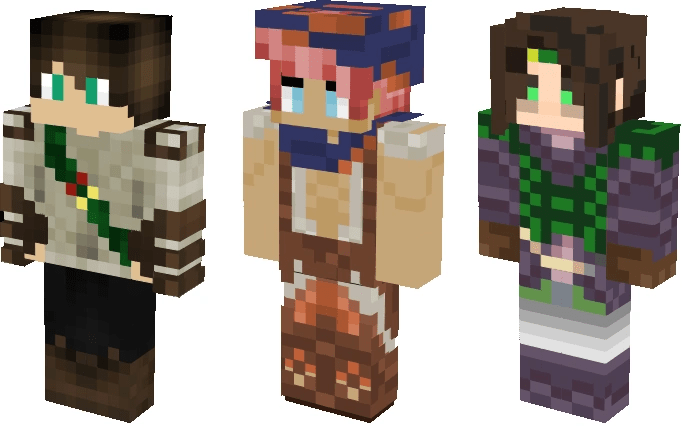 The Endless Spears survived the threats of the Venswood by striking back at the creatures that hunted them. This lifestyle lead to the Spears having a reverent outlook on the natural world, leading them to ensure nothing from their hunts goes to waste. While not all members of a tribe will be hunters, all must do their part in ensuring their communities survival. Meat needs to be cooked and preserved, bones need to be carved into trade goods, hides need to be tanned into leather, and to not contribute to the whole is of the greatest offence

Their “waste not want not” attitude leads a tribe to develop their appearance around their surroundings and their most abundant resources. For example, a woodland tribe might see an abundance of territorial bears and wolves, and thus dress in furs and live in woodland cabins. One would find the most prized goods of a tribe as part of a vast trade network, for example: A woodland tribe might offer fur coats, fang-based weapons, and hides for the giant clam shields/armor, jewelry, and shell-currency from a coastal village.

The Bonds of Family

The Endless Spears are organized into tribes of a handful of families of similar ideals. Each family has a primary purpose within the tribe such as logistics, tracking, or whatever the tribe requires managing, and is represented in the tribe by an Elder. A family who runs logistics for a tribe might usually have craftsfolk and cooks within it and would certainly have members who are hunters, scouts, and scholars to work directly with the other families.

Due to the volatile nature of hunting, tribal life, and general dangers of the Venswood, tribal needs can change, families can grow, or be reduced to small numbers. This necessitates the absorption or adoption of families or family members. To the Spears, family is not just by blood, it is an oath. The adoption of others, even from other races of the Wildchoir, is viewed as both normal and necessary. These bonds by oath are taken just as seriously as any blood relative of the family.

Every family in every tribe is a product of their ancestors and they stand on the shoulders of those who literally slayed giants. Trinkets, trophies, handmade clothes, and weapons are all passed on to family members to be kept as memories of their loved ones as reminders of the strength of the family. These trinkets tend to be worn openly, and often, to show the pride of the family.

The Other Side and the Endless Hunt

The Other Side is the most impactful belief of the Endless Spears. The Spears believe that all mortal beings have a reflection of their souls that exist within the plane known as the Other Side. Every soul lives on in the Other Side after death, but to the Spears only those who have completed their first hunt and the ritual known as the Tacnu Zoku will live on as true continuations of their former lives. These fully realized Spears continue their now-immortal lives in a never ending hunt with all the worthy Spears who have passed before them.

The Boneshapers of the Endless Spears act as shamans and guides in manners relating to the Other Side; from the Tacnu Zoku to the creation of the ancestral bone spears. In addition to ritual duties, Boneshapers offer general guidance and make sure the next generation of Spears don’t forget the secrets of the Other Side. There is no formal body of Boneshapers and there is no formal method of training, the position sustains itself through apprenticeships by Elder Shapers.

Things such as hair and skin color among the Human Spears vary wildly as they do with most humans. Most Spears share green or blue eyes, but darker colors are also seen. Spear clothing varies but is typically made from animal materials. Leather, hide, and furs are common and pieces of bone are used as everything from buttons to jewelry. Spears commonly wear a variety of trinkets and jewelry handed down from their ancestors, typically made from beasts they hunted.

Being Human, the oldest among them is typically 80 or 90 but due to the highly active and highly dangerous lifestyle of the Spears most of their number are in their 20s or 30s.

The following parameters are used within MPM, with a variance of around 10-15;

Spears are not given a name at birth, but are instead given a nickname by their community or peers when they are young. These names are typically short and have a story behind them. While most can appear to be poking fun at the individual or even cruel, most Spears take pride in this early name regardless of what it actually is.

Spears eventually have their full family names bestowed upon them by Elders typically after notable accomplishment by the Spear. Family names vary but typically have qualities relating to their history in the Venswood. Some families have a tale for the origins of their family name but others are lost to time.