Stargazing theologians and artists who seek to bring order to the madness.

A dualistic people, separated by night and day, the Caeli are also divided by faith, favoring the ancient wisdom of the many sects of the Ascensionist faith, or the knowledge of the Grand Design put forth by ancestors known to many Caeli who still live. The old ways teach of the grand plan and how the future could be divined from the stars, but the old ways have failed, and Imeris has burnt. Now the Caeli must make sense of the new world they live in, and what comes next cannot be determined. 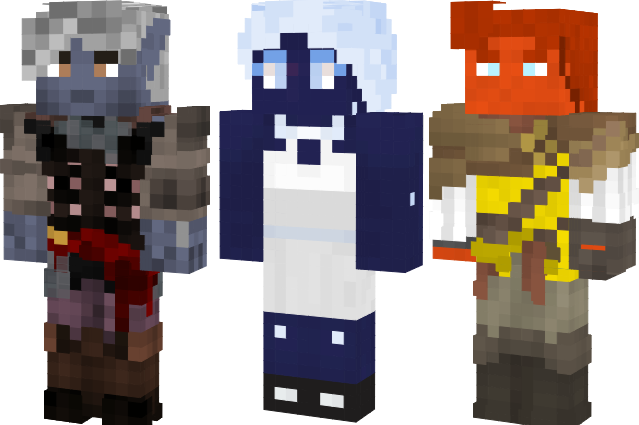 Each Caeli is born with a specific, non-inheritable 'Affinity', which attunes them to the sun or the moon. This Affinity expresses itself in their skin complexion and activity cycles. Caeli skin pigmentation ranges from dark brown to pale blue or white with markings appearing all over the body, which are usually symmetrical and associated with affinities.

Solar Affinity: Solar Caeli have the activity cycle that matches with most of the Entente, seeing most activity while the sun is overhead. Solar Caeli usually prefer the direct route to problem-solving. Like all Caeli, they enjoy patterns and planning, but their plans are often more straightforward than others', focusing on perfecting a single route rather than plotting around every possibility. They take on warm colours. Their skins are browns, bronzes and reds, whilst their markings range from gold to red to white.

Lunar Affinity: Lunar Caeli are nocturnal, being most active during the night. Due to this Caeli civilization is often said to never sleep, as at least half of their people are awake at all times. Instead of prioritising the path in which they excel, Lunar Caeli are typically more adaptable, planning around eventualities which may or may not actually come to pass. Their bodies take on shades of grey and or cold colours. Their skins are blue, purple, pale or grey, with their markings ranging from silver to black.

Grasp Beyond Their Reach

Caeli are inquisitive by nature with an inherent drive to investigation and experimentation. Caeli are among the foremost scholars and tacticians of the Entente and even the most disinterested Caeli poke and prod into new projects and progress. These lofty aspirations often lead them to view other people of the Entente as pedestrian.

The cyclical nature of Caeli biology has made their society highly formal with emphasis on courtesy and punctuality. Caeli often act bitter and distant if these expectations are not met. There are certain schools of Caeli who believe that those must follow the etiquette of the host, but others who stick to a strict code of Caeli ideologies.

The Caeli practice dueling among themselves as a way to settle disputes, although because of their affinities, many duels break down into arguments over the time they should take place. When a duel is ordered, those challenged may decline, but it is often a sign of disrespect and a breach of etiquette. Once terms are accepted and the circumstances are in order, the victor is shown to be the winner of the dispute and it is bad form to suggest otherwise.

Whilst Caeli physically mature by age 30, society considers them adults at ages 50-100. The Caeli do not continue aging past this maturity and have no known maximum lifespan, only dying to injury or acute illness.

The physiological effects of ageing on Caeli are limited to fat loss and deepening skin tones, however a complex variety of psychological changes will take them, as a result of their many lifetime experiences.

Into their second century they will slowly become detached from material needs and emotions, with the oldest Caeli completely unaware of everything around them. This 'enlightenment' takes many forms, such as violent madness, catatonia or utterly alien behaviours.

Caeli stand around 2 meters tall with thinner builds but their complexion is based on affinity:

Solar Affinity: Solar Caeli take on warm colours. Their skins are browns, bronzes and reds, whilst their markings range from gold to red to white.

Lunar Affinity: Lunar Caeli take on shades of grey and or cold colours. Their skins are blue, purple, pale or grey, with their markings ranging from silver to black.

Caeli exhibit unique symmetrical markings that appear on the body which gradually change as they age; Caeli consider the symmetry of these markings to be a conventional mark of beauty. Their eye color of a Caeli is unpredictable, varying just as much as the color as their skin markings, hair, and skin color. Their hair has a wide range of colors. These usually are the same as or similar to their bodily markings, such as white, red, and brown.

The following parameters are used within MPM, with a variance of around 10-15%:

Caeli typically have a combination of Gaelic and Arabic names, with their given name being a part of their longer True Names. All Caeli have a True Name, which describes the state of the stars/planets/etc at the time of their birth alongside family names and given names. Most true names are longer than to be used in traditional conversation, and thus a given name is used