Driven, hardworking, and proud, the Cuthail were the first to shape the Venswood to their will rather than dwell by its rules. Friendly and communal, the Cuthail strive to build a life of comfort and hospitality. Their tendency towards large families often lends a hand to developing familial networks that once spanned the entirety of the Venswood. Don’t make assumptions based on their friendly nature or diminutive stature; Cuthail are more than capable of defending their own should they find need to do so, even if that means taking up Nana’s rolling pin. 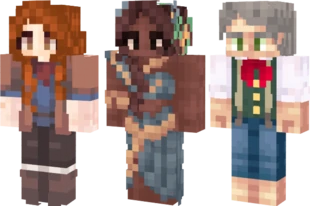 The Roots of the Community

Cuthail value community and dependability above all else, to the point where they can become frustrated with others who shrug off their responsibilities. It was the Cuthail who cut the first glades and meadows from the Venswood, making permanent settlement for members of the Wildchoir a possibility. To the Cuthail, it isn't enough to survive; one should thrive! To most Cuthail the best weapon is a strong, self-sufficient community that needs no defense, but failing that, a common kitchen pan will do in a pinch.

While the Cuthail will happily get their hands dirty, they prefer innovative solutions that improve daily life over hard work. Despite their impressive agricultural capability and work ethic, the Cuthail can be mistaken for fussy homemakers by the unfamiliar. The reward for their labors and innovation is the ability to produce all manner of cozy comforts and rich foods, all within their lavish, well-furnished homes.

Within the communities, most halflings arrange themselves into families. These families need not be related by blood, but can be formed through bonds of mutual respect or adoption. These groups share a family name, and can stretch far beyond the bounds of a single town. These families also often share property, running workshops and farmsteads as a whole, not by any individual. A Cuthail family can also extend to non Cuthail, with members of other races sometimes being adopted in.

The Cuthail tend to sit around 1 meter tall and are of relatively slender build. Hair colours vary, but tend toward darker shades. Eye colours are most commonly green, blue and brown.

Men are capable of growing facial hair, though most who aren’t clean shaven tend toward more styled forms, such as mutton chops or moustaches rather than full beards.

Cuthail typically live to about 100 and mature around the age of 16. Particularly long lived individuals live up to 120.

The following parameters are used within MPM, with a variance of around 10-15;